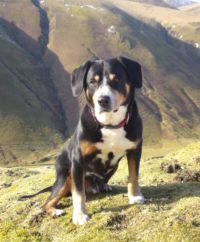 The Entlebucher is the smallest of the Swiss Mountain Dog family. Unlike the more familiar Bernese, it has a short coat, but similar markings. It originates from the environs of the village of Entlebuch in the Canton of Luzern, which neighbours Bern.

The Entlebucher has an affable temperament making it an ideal family dog. Originally used to herd cattle and then pull milk carts, it is a very strong chested dog. They are bright, engaging and incredibly loyal, developing particularly strong attachments to their prime carer. Weighing in at between 23kg and 30kg they can cause many bruises in their affectionate enthusiasm.

They are incredibly clean dogs, requiring little grooming and take pride in maintaining their appearance. Moulting twice a year, they shed comparatively little hair at other times. Historically they were natural bob-tails. However, this is no longer the case, with their long black tails being distinctively tipped with white. 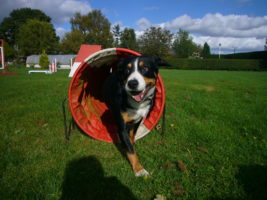 An Entlebucher develops a very strong bond with its principal carer and appreciates having human company. They are not a dog that is well suited to being left on their own for long periods of time.

They like the opportunity of free-running and although they are moderately demanding of exercise, you will generally tire before they do. As intelligent working dogs they enjoy the challenge of both agility trials and flyball.

The Club has developed a breeding programme in the UK which includes a number of eligible stud dogs and bitches. For further information about the availability of puppies, please see the Puppies page. 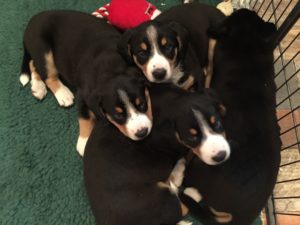 Please see the Health page for information about health issues.